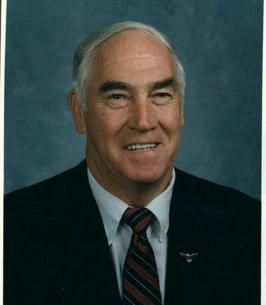 Gary was born in Zenda, Wisconsin, on February 16, 1930. He received his Bachelor’s Degree in Education and his Master’s Degree in Administration from-UW Whitewater. He dedicated 35 years to his love of education, the majority spent teaching in Springfield and Burlington. Gary had a love of football that began at an early age and continued throughout high school and college. He played semi-professional football for the Delavan Red Devils and Racine Raiders. He loved to hunt and fish at his home on Birch Lake in Northern Wisconsin. He loved to fish in Canada with his family. Gary also designed and had patented a product known as the E-Z Stacker.

He was preceded in death by his parents, Thomas and Jean Humphrey, older brothers James and Roger, and sister-in-law, Joyce.

He is survived by his wife, Esther, two sons, Gary II (Laura), and Mark; two sisters, Patricia Spiegelhoff and Ruth Ann Hadinger, and one brother Budd (Irene) Humphrey. He is further survived by four grandchildren, Jacob, Taylor (Justin), Dora, and Jessie. He was also excited to learn that his first great grandchild will be joining the family in March of 2022.

Visitation will be held at the FUNERAL HOME (515 Center Street, Lake Geneva) on Friday, September 17th, from 5:00-8:00 p.m. And again, on Saturday, September 18th from 10:30- 11:30 a.m. with the church service at 11:30 a.m. at the First Evangelical Lutheran Church (1101 Logan Street, Lake Geneva). A luncheon will be served at the church immediately following the service. Memorials in Gary’s name may be directed to First Evangelical Lutheran Church. Lazarczyk Family Funeral Homes, Steinke Chapel of Lake Geneva, WI is proudly serving the family.

All rights reserved. This obituary is also archived at obittree.com